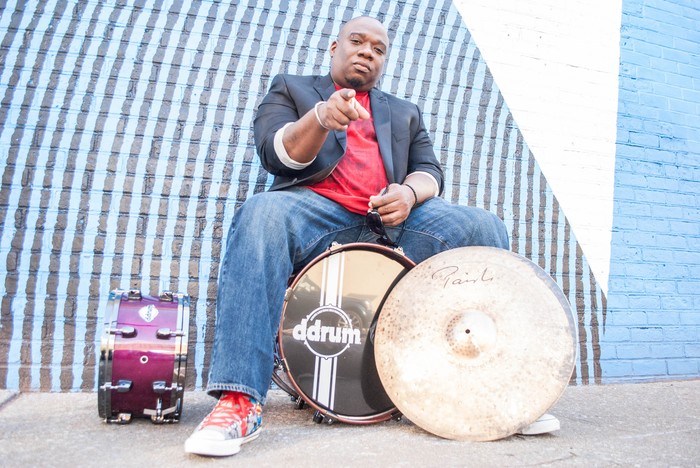 If your belief has been that drummers ONLY keep time, well for starters you may not truly understand how crucial that is to the vibe of a successful song or live performance. When you check the impressive resume of James “Biscuit” Rouse it’s pretty clear he’s quite adept at setting the “pocket” just right based on the array of notable artists who’ve tapped his talent like Bilal, Chaka Khan, Pharell, Stevie Wonder, Usher, Kelly Clarkson, Talib Kweli, or the recently lost to soon, Prodigy of the famed rap squad Mobb Deep. Some others who are boasted on that lengthy scroll of accomplishments are examples that firmly illustrate how truly pivotal the drummer’s role is and because of how very, very good “Biscuit” is at it, his duties are expanded to include the title of Musical Director as is the case with Lauryn Hill or Vivian Green.

But there is something else a number of fine drummers over the years have been known to do and do well and that is sing. Aside from legendary vocalists like Stevie Wonder, Marvin Gaye, Teddy Pendergrass or Jeffrey Osborne – who few may know were drummers early in their careers, but gained fame known more as exclusively singers – Rouse is more akin to renowned artist Phil Collins or super talented contemporary, Anderson Paak, drummers who often share their vocal prowess from behind the kit.

Oh and there is another thing – Leader. Drummers are often that too! And somehow between the steady stints holding the beat down for A-list artists, Rouse is performing with his own stellar band and putting out projects like his recently released EP, Biscuit Street, a strong offering that adroitly flaunts his eclectic musical palette and ability.

Check out the new EP, Biscuit Street on iTunes  or Spotify

And for more about James “Biscuit” Rouse go to JamesBiscuitRouse.com